Etan’s own factory: from a wish to reality!

Our own factory in Bosnia and Herzegovina. A long-standing wish and the opportunity to implement product innovations at short notice. In the past, Etan made its purchases in the Far East, Vietnam, China, and Taiwan. However, this regularly led to unnecessary mistakes regarding product changes and innovation. “This can be done differently,” thought Etan’s managing director, Ari Verhoeven.

Years ago, when Etan was still mainly importing, Ari visited several Asian production sites. “When I visited beautiful professional factories one day and the next day a door opened where children were working, you get a very anxious feeling”, says Ari. “Whether it’s in business or on a personal level, I don’t want to be associated with such practices.” From then on, the choice was clear – a European production facility, where you can see what is done, with normal standards and values within a group of people who enjoy what they do. Having our own European production site not only made it possible to implement innovations with relative ease but also to create jobs in European countries.

But how to go about it? Talks with fellow entrepreneurs and government bodies ultimately brought the possibilities in the developing country of Bosnia and Herzegovina to the fore. A country that had recently emerged from a war, a labor climate focused on handicrafts and possible subsidies that could facilitate doing business in Bosnia appeared promising to start up here. This subsidy meant that 50% was financed by the entrepreneur and 50% by the Dutch government on the condition that a number of conditions were met. One of these conditions is the cooperation between the entrepreneur and a local partner. What started as a stepping stone turned out to be a stumbling block. The partner was found, the preliminary process was set in motion and investment later showed that this local cooperation would not be a long marriage. To great regret, the interests of those involved were too far apart. Whereas Ari was aiming to set up a serious product location, his business partner was looking for a bigger wallet. The cooperation came to an end, the subsidy was withdrawn, but the desire to establish a business in Bosnia remained.

How to proceed? Confidence in the plan and some pre-financing made Ari decide to start on his own initiative. A new location, new premises, a new director, and starting small – that was the approach. Ari soon realized that, in the long run, and with a number of candidates, this step could blossom into something beautiful. With a sober Western European attitude, Ari stepped into an Eastern European working environment. ‘I have not deviated from my Western thoughts,’ says Ari. My employees, regardless, receive a salary on the 25th of the month and receive holiday pay. The social aspects that we know in the Netherlands, but which are certainly not the norm in Bosnia, were implemented. Normal working hours, holidays, and stability were pursued in order to offer the Bosnian workers a better life. “The thought that you can offer 25 or 30 families a good living and contribute to the improvement of a community brings a smile to your face,” shares Ari.

The pursuit of Western standards and norms has shown that this cannot always be done on a one-to-one basis. A mix is needed. This starts with the management. A director must have a clear understanding of what a Dutch owner wants. This director was found and the first department in the factory was set up the sewing department. The first products to come out of the factory were replacement jumping mats for the trampolines. Later, trampoline safety nets and trampoline padding were added.

Only outdoor toys that are sold through Dutch entities, where Ari is involved, are made in the factory. “I have to have a feel for it,” says Ari. Later, this range was expanded to include the company SunnyTent, a Dutch company, which Ari co-owns, that sells tents that heat your pool without using electricity. “An innovative and sustainable idea, I had a good feeling about it right away,” says Ari.

Ari’s desire to set up a European production site is carried through in almost every facet of the factory. No Asian PVC, but German quality. Better materials, longer guarantee periods, and higher quality, that’s what Ari wanted. For six years, the production of trampoline jumping mats, safety pads, and SunnyTents has been the core activity of the Bosnian production site. The steel department was added in the spring of 2020. Trampoline frames were produced but on a small scale. The right machines were purchased and the staff was further trained to produce these frames. “It’s great to see people who were living from day to day change into employees who all have a piece of Etan DNA in them.” A sense of loyalty and a solid team that strives for quality together. This was the goal of this down-to-earth Dutch entrepreneur.

Meanwhile, we’ve reached the end of 2020 and we can proudly say that the Etan Premium trampolines come entirely from the Bosnian production facility. A qualitative trampoline, made of European materials according to European standards. What is the next step? I ask Ari. “The Etan UltraFlat trampolines“, says Ari. A semi-professional square trampoline made of even stronger steel, an even better jumping mat, and even higher quality. 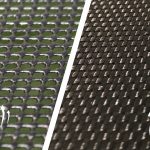 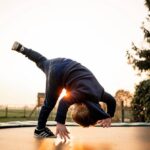