Doing your bit for a better future!

In addition to making a quality product, Etan’s production facility in Bosnia and Herzegovina looks to create a better future for its workers. Workers, whose lives were affected by war just two decades ago, every day.

This is how I asked Ari Verhoeven, managing director of Etan Trampolines, SunnyTent, and JumpparksEurope, among others, about these socially improving measures in the second part of the interview.

“Quality living conditions, just as we know them in the Netherlands, that is my goal for my staff in Bosnia,” Ari shares. A good salary, training opportunities, and possibilities to grow are among these measures. For example, the production manager, who has been with us since year 1, is now our director. “We encourage all our employees to develop and give themselves opportunities, whether with us or somewhere else.” Says Ari. For example, German and English language courses are offered for two afternoons a week. However, change is not always accompanied by willingness. A Bosnian culture that identifies with the unknown makes me unloved; I live in Bosnia and I will stay in Bosnia. This required some motivation, a push in the right direction from Ari.

Then a number of cultural differences came into play. Whereas Western European culture is characterized by a fairer distribution between men and women. Bosnia, as an Islamic country, is characterized by a clear division between men and women, in which the man is higher. A woman should not be addressed by a strange, unknown man. “I sometimes got a questioning look when I addressed one of the seamstresses directly,” says Ari. In addition, the Netherlands is characterized by a horizontal business structure with a relatively low hierarchy. In Bosnia, on the other hand, you can never go wrong as an owner. “If you do it wrong, you do it right as the owner,” says Ari. This stems from a fear of dismissal, a rebuttal, or disrespect towards a superior. Unfortunately, this is accompanied by little feedback or input from the employee, often the specialist. It took a while, but growth is visible in this area as well. The opinion of employees is increasingly heard. “I find this feedback essential”, says Ari. After all, they are the experts, not me.

In addition to development opportunities and training for employees, the production facility is also looking at actions to reduce and prevent waste. For example, purchasing is calculated down to the millimeter, and waste materials are used for shipping or in the manufacture of other products. Protective bags for SunnyTents and Etan’s trampoline repair kit are examples of products made from these waste materials.

Not only in the factory itself is social and climate improvement being considered, but also organizations in Bosnia affected by the war are being actively helped. For example, donations are made to orphanages, and support is provided in the form of food or a collection of clothes and toys for orphans. “In my opinion, this initiative is still in its infancy, but the plans to be able to do more have been made,” says Ari.

“What does the future look like in Bosnia?” I ask Ari. A group of 40 employees, a good manager, overview, and mainly a team. There is no need to become bigger, but there is a desire for better and more fun. “A factory that continues to innovate, even when I have stopped.

The best trampoline games of your jumping summer!Trampolines 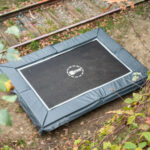 Do I go for a round or a rectangular trampoline?Trampolines
×